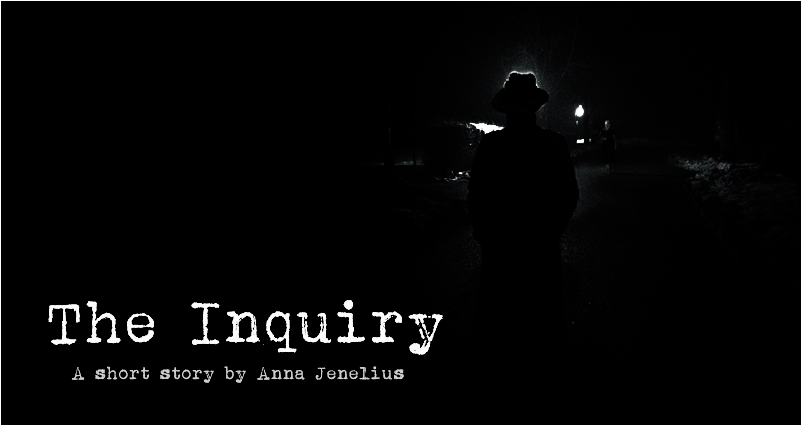 It was late November, and the rain was beating heavily against the outside of my office windows. My coat had created a puddle of water below the hanger by the door, and I had for once removed my hat to keep it from doing the same on my desk. For what seemed like the hundredth time, I was reading through the details of the case I was currently working on. Rubbing my eyes, I cursed to myself. All leads had turned out to be dead ends, and I was fresh out of ideas. There was something about the files I just could not wrap my head around. My word processor did not seem to be able to open the format, and the hours of googling had been a waste of time. But the client was paying well, which simply left me no choice. I had to solve this riddle.

As I reached for my cup of long since cold coffee, I heard the knock on my office door. The sound woke me abruptly from my worries, and perplexed, I glanced at my watch. Who could that be at this hour? Most people were out eating lunch by now.

Before I had gathered myself enough to answer, the door handle turned and a woman walked in. Her pale face was framed by raven hair and she was clad in a red cardigan that smoothly followed her every move. Uninvited, she seated herself in the chair on the other side of my desk.

“Mr. Parker”, she said, slowly tilting her head to one side. “Do you know why I am here?”

Not wanting to give away more than necessary, I decided to answer vaguely.

She reached for her purse, opened it, and picked up a cigarette. As its blue lamp lit up, a faint smell of pineapple filled the room.

“It’s about my husband. He’s missing.”

“Oh?” I said, leaning back in my chair. “Let me guess. You suspect foul play?”

She looked at me for a long time, as if she was unsure whether or not she could trust me.

“I don’t know what to think”, she answered finally. “We were supposed to meet up for lunch fifteen minutes ago, but no one knows where he is. That’s why I came to you. I hear you are the best…”

The story was all too familiar for me. Pictures of similar encounters earlier in my life flashed before my eyes, as I slowly scrolled down my Facebook feed. Then, as I turned my attention back from my computer to the woman, I realized something.

“I must say, madam… One thing bothers me about your story. If you really wanted to find your husband, why didn’t you just call him?”

She looked at me sharply. Something resembling fear entered her eyes.

“Are you saying I’m a suspect?”

“I can’t rule out anything. Please… Just tell me everything.”

“I… I…” She sighed and looked down at her hands. “My phone is dead. It’s an iPhone. I charged it overnight but… I checked the news while I was having breakfast, and now…” She swallowed and looked up at me. “I was too ashamed. Please, you have to believe me!”

“So, Mrs. Ericson… Do you have any leads? Did your husband have any enemies, maybe someone who might benefit from him being delayed?”

She did not seem to react to me knowing her name, although she had not mentioned it once since we first met at the company Christmas party last year. Instead, she hesitated for a second.

“I was thinking maybe… Maybe you could investigate his calendar? See who he met just before he disappeared.”

I tried to suppress a smile. The woman continued to surprise me with her sharp mind. Then again, she was the CEO of the company.

It was tedious work, and I could sense her intense eyes on me as I searched for the entry. When I finally found what I was looking for, I felt my heart skip a beat.

“What is it?” she asked tensely, obviously noting my reaction.

“I’m afraid…” I began slowly, with my eyes still fixed on the name next to Mr. Ericson’s. “I’m afraid his last meeting was with Mr. John Silvermoor.”

I could hear her inhaling rapidly.

“Silvermoor… Oh no. There-… There wasn’t a Yankees game last night, was it?”

My heart sank as I realized I had to tell her the truth. I decided to just give it to her straight, despite me being in a relationship with a man since seven years.

Her eyes opened wide. Covering her mouth, she whispered: “No… No! They’re going to talk about it forever. Oh God…”

Rushing to her feet, she remembered her e-cigarette and turned it off.

I wanted to stop her – but upon seeing the determination and pain in her eyes, I hesitated. After a short and violent battle with myself, I said:

“They are in the conference room on the 5th floor. If you hurry, there could still be some free tables at Sophie’s. And madam… Good luck.”

She flashed a smile at me, nodded, and left without another word. The only things she left behind were silence and the stubborn smell of lingering pineapple. Walking over to my window, I could almost feel the weight of all my life’s departures press down on me. All the goodbyes echoed in my ears, all the well wishes and promises to do this again soon scratched and tore at my memories. It never ceased to hurt.

Then I sighed. Shaking my head, I muttered to myself: